Attention Gun Owners: Have you noticed a shortage of ammunition when you visit your local gun shop or big box retailer? If so, you’re NOT alone…

What Good are Your Guns…
If You Don’t Have Any Ammo? 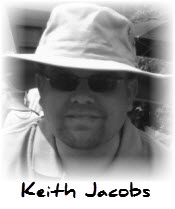 Date: | From the Shop of Keith Jacobs

Our 2nd Amendment rights are still under siege.

Even though Congress and the President failed in their recent attempts to ban high powered rifles and create new gun control laws, they’ve regrouped and are now implementing their backup plans.

These backup plans could be WORSE for gun owners than the original legislation they tried to pass. And unfortunately, they could be much more detrimental to gun owners.

Since the founding fathers gave us a right to keep and bear arms, leftist politicians can’t take away our guns (no matter how hard they try!).

So instead they’ve got plans to essentially turn our guns into nothing more than glorified paperweights.

These anti-gun crusaders have plans already in action right now that target making it incredibly difficult to get your hands on bullets and ammo.

Federal Ammunition Stockpiling on the Rise… 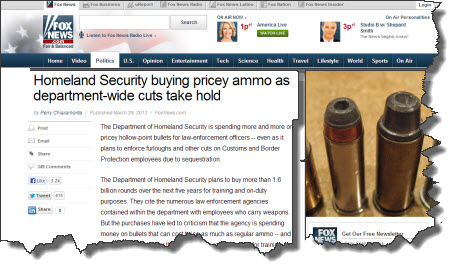 Did you know that the US Department of Homeland Security is stockpiling 20 years’ worth of ammunition? This includes 1.6 Billion (with a capital “B”!) rounds of ammo.

According to Forbes.com, that’s 20 times the amount we used in any year of the Iraq war. Why on earth would the department need that much ammo?

Could it be that buy purchasing that much ammo they are intentionally emptying the shelves so ordinary Americans – like you and me – can’t buy bullets for our shooting activities?

That may not be the reason but it certainly looks fishy to me…especially at a time when our government is constantly bickering over debt ceilings and other budget shortfalls. 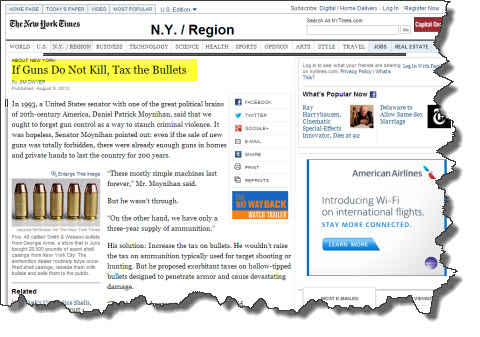 And in addition to the stockpiling of ammo in Federal agencies, anti-gun lawmakers are now gaining traction on Bullet taxes.

The idea of taxes on bullets and ammo was first introduced by the late Senator Daniel Patrick Moynihan. He recommended increasing the tax on bullets 10,000 PERCENT!

That would make the tax on a 20-cartridge pack of bullets $1,500…certainly well out of the budget of most Americans.

So far the newly introduced laws and regulations aren’t that insane, but it’s a slippery slope that could lead that direction eventually.

New Jersey has proposed a modest tax while Maryland is looking at a whopping 50% tax on bullets. There are also similar taxes being introduced in California, Connecticut, Nevada and a handful of other states.

It’s only a matter of time before a Federal Ammunition Tax is up for vote. So what can YOU do?

If things go according to plan for the anti-gun fanatics, the price of bullets will be sky high in the not-so-distant future. 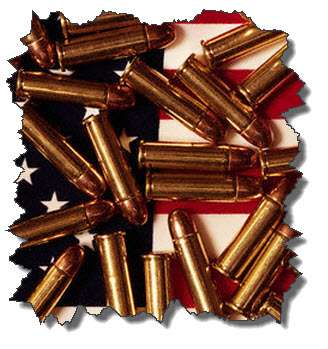 Many gun owners will simply cave in and give up their passion for shooting. Is that what you will do?

Not me! I will NOT give in. And I doubt you want to either.

Shooting is in my blood. My father and his father before him were proud gun carrying Americans and I plan to keep shooting as long as I’m on this Earth.

In my opinion there are a couple of things you can do.

First off write your legislators and demand that they put a STOP to the federal ammo stockpiling and new bullet laws.

I know you’re not naïve though. Just writing your Congressmen doesn’t mean anything will stop with these new bullet taxes and ammo shortages.

The next thing you should do is CLAIM YOUR AMMO INDEPENDENCE!

There’s one sure-fire way to do this and the good news is practically anyone can do it.

To claim your ammunition independence you need to learn the skill of reloading. If you’re not familiar with the term, reloading is the process of reusing your existing bullets and producing your own new rounds.

The great thing about the process of reloading is that there is NOTHING that the anti-gun crusaders can do about it. They can’t tax it. They can’t stop you.

This is truly the way to ensure that you always have the ammo you need for your activities no matter how many bullets are available at the local gun shop. 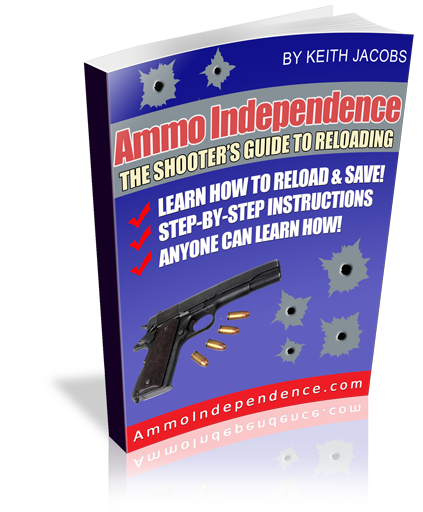 In the past few months, I’ve heard so many fellow gun owners talk about their frustration at the lack of available ammunition at local gun shops, Wal-Mart and even online vendors.

When I tell them that I no longer worry about gun shortages due to my ability to reload my bullets they always ask me how I do it.

I can’t tell you how many times I’ve shared tips and tactics for getting started reloading ammo. Lately, a lot of people have been telling me that I needed to put my information into written form so many more firearms owners could benefit from reloading.

That’s what I’ve decided to do. I am proud to announce introduce you to my new guide called “AMMO INDEPENDENCE: The Shooter’s Guide to Reloading”.

This 32-page report gives you all of my personal tips and tricks on how to get started making your own ammo so that you are always fully loaded no matter the ammo inventory at local gun shops.

Here are a few nuggets of what you will discover inside…

Get Peace-of-Mind on Your Ammo Supply (and save cash too!)

Before I go any further, let me say that reloading is nothing new. I’m certainly not the only person reloading my own bullets…but I am often surprised how few fellow gun owners do. 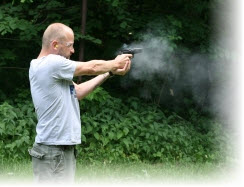 Too many people I talk to have the misunderstanding that reloading is too hard, too expensive for the average shooter or simply too dangerous.

That’s not the case. It’s actually easier-than-ever now for average firearm owner to become a reloader.

Once you learn this skillset, you’ll be amazed at the peace of mind you’ll have knowing that YOU are in control of your ammo supply (not the government!).

I think you’ll also be shocked at the impact it has on your bank account. In my experiences, reloading is at least 50% cheaper than the lowest priced same caliber cartridge at the local gun shop!

It’s actually even cheaper when you consider you can reload up to 30 times and your reloading equipment will last for decades.

Do you see yet why you should learn this valuable skill set?

Don’t Waste Time Learning Everything Yourself!

I wasted so much time (and money) when I decided I wanted to learn how to reload.

There were so many hours spent researching processes and products for literally months. It’s almost embarrassing when I think about how much time I spent and money I lost trying to figure things out for myself.

I don’t recommend doing it that way. That’s why I think you’ll love my report. You get to benefit from all of my trial and error.

My concise report will give you all the information you need to get started safely reloading your ammo…starting today!

I’m even throwing in a few of my favorite resources to help out even more.

Here’s the deal. If you learn how to reload your bullets you’ll be able to…

What I’m Charging for this Report…

When I first put this report together and started sharing it with my friends and fellow gun club members they said I should sell it for $100 or more.

They told me with all the time and effort I put in I should charge that much to recoup my investments. That wasn’t my goal with this report.

My goal was to show as many of my fellow gun owners that they could truly claim their ammo independence by learning the valuable skill of reloading.

That’s why I’m NOT charging $100 for this report. Heck I’m NOT even going to charge $50 for this information.

That would limit too many people from learning this skill. I truly want YOU to be immune from these future gun taxes and from the shady political ammo stockpiling tricks of the federal government. 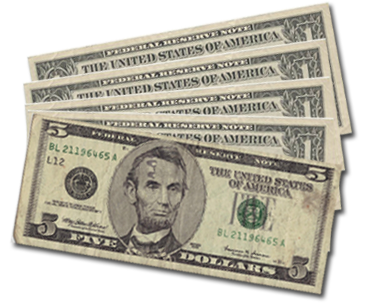 I’ve decided to sell my report for just $9.

You read that right…you get my step-by-step guide to reloading ammo for under ten measly bucks!

I really feel you won’t find a better deal for your shooting passions than this. Once you learn the skill of reloading, you will save hundreds, if not thousands, in future ammo purchases (and taxes!).

A tiny investment of $9.00 gets you on your way to ammo independence! Click the button below to get your copy right now (instantly delivered!)

I expect some might ask why not give this report away. Well there are a few reasons for this.

First off, I spent a LOT of time and effort learning this myself and I’d like to recoup my investment. There’s also costs associated with having this website online and delivering the report to readers.

Secondly, I just don’t think as many people will put the knowledge into use if they get the report for free. When you pay something – even if it’s just 9 bucks – you are more likely to actually read it and implement the tactics.

By deciding to price the report at $9 I think the price is well within reach of most serious gun owners. You can hardly buy lunch for this price anymore at your local burger joint!

[guarantee_box_1 title=”Our 30-Day 100% Money Back Guarantee”]I know you’re going to love my reloading report…but just in case it doesn’t work for you I’m going to give you a peace of mind guarantee.If you buy it today and decide it’s not for you, you can return in anytime within 30-days and I’ll refund your purchase entirely. This means you have NO RISK in making a purchase today. You’ve got my 100% satisfaction guarantee.[/guarantee_box_1] [divider_bar_wide]divider [/divider_bar_wide]

What are YOU waiting for? 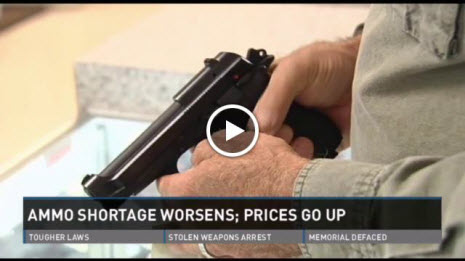 Look…you know things aren’t getting better for gun owners. It’s only a matter of time before the federal government starts taxing our ammo where we simply can’t afford to buy it.

Or they continue their political tricks of having federal agencies buy up all of the ammo so it’s not available on the shelves for you and me.

This is their backdoor way to disarm us since they can’t get past the 2nd Amendment rights. I don’t know about you, but I’m not going to let it happen to me.

My easy-to-read $9 report on reloading is the first step towards your complete ammo independence. Don’t put it off any longer.

And don’t forget, your purchase is completely backed by my 100% guarantee so there’s absolutely nothing to lose!